Together these tools allow users to collaborate with other departments, suppliers and vendors by sharing their SOLIDWORKS data.

The SOLIDWORKS Extraction Widget gives users a way to extract SOLIDWORKS data out of 3DEXPERIENCE. This widget is geared toward the SOLIDWORKS data model which is based on the UPS/POWER’BY data model. Using this tool, customers can, for example, search for an assembly in 3DEXPERIENCE and extract all the data relating to the assembly – its related children, all linked CAD data and drawings – and places it in a ZIP file. The tool also creates an Excel file with all metadata related to the extracted SOLIDWORKS data, such as part number, description, revision, unit of measure, and engineering change information. Users can then share these files with other departments internally or vendors and suppliers to import into their SOLIDWORKS PDM as they collaborate on projects, using the SOLIDWORKS PDM Import tool.

As show below, to create the ZIP file, users click “Generate Report.” 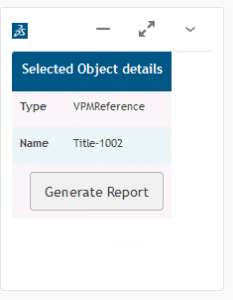 The widget offers functionality to: 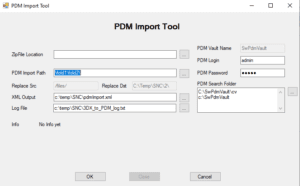 If you’d like more information about extracting SOLIDWORKS data from 3DEXPERIENCE and importing it into SOLIDWORKS PDM, contact us.

This website uses cookies to improve your experience while you navigate through the website. Out of these, the cookies that are categorized as necessary are stored on your browser as they are essential for the working of basic functionalities of the website. We also use third-party cookies that help us analyze and understand how you use this website. These cookies will be stored in your browser only with your consent. You also have the option to opt-out of these cookies. But opting out of some of these cookies may affect your browsing experience.
Necessary Toujours activé
Necessary cookies are absolutely essential for the website to function properly. These cookies ensure basic functionalities and security features of the website, anonymously.
Functional
Functional cookies help to perform certain functionalities like sharing the content of the website on social media platforms, collect feedbacks, and other third-party features.
Performance
Performance cookies are used to understand and analyze the key performance indexes of the website which helps in delivering a better user experience for the visitors.
Analytics
Analytical cookies are used to understand how visitors interact with the website. These cookies help provide information on metrics the number of visitors, bounce rate, traffic source, etc.
Advertisement
Advertisement cookies are used to provide visitors with relevant ads and marketing campaigns. These cookies track visitors across websites and collect information to provide customized ads.
Others
Other uncategorized cookies are those that are being analyzed and have not been classified into a category as yet.
Enregistrer & appliquer
wpDiscuz